"Three out of four of West Somerset’s buses – gone"

Bus users in Minehead and Porlock are horrified by plans to withdraw the No. 10 bus, the 101 and the 14, after they were deemed no longer viable. Naomi Marley, editor of Exmoor Magazine (www.exmoormagazine.co.uk and facebook.com/exmoormagazine) met some of those affected by the proposals.

“I thought they couldn’t take away our buses… ?
But actually they can, can’t they?”

These were the questions posed to me today by a bemused and upset 64-year-old Betty Kisby from Porlock, when I met her – and countless others – in Minehead’s Wellington Square. Here, a petition to ‘Save Our Buses’ was being signed by hundreds of people in the deflating October drizzle. After signing, rather than drifting off, they hung about chatting with one another, all trying to understand the situation.

The background sound from this largely senior gathering was more akin to the low drone at a huge Irish wake than an angry protest. I think that’s probably because people haven’t got their heads around this yet. Many will only have learnt about the cuts – not proposed but finalised, and reportedly without proper consultation – yesterday, thanks to Tony James’ extensive and timely rundown of the situation in the West Somerset Free Press, which also included a call to arms to get biros at the ready from 10am today. 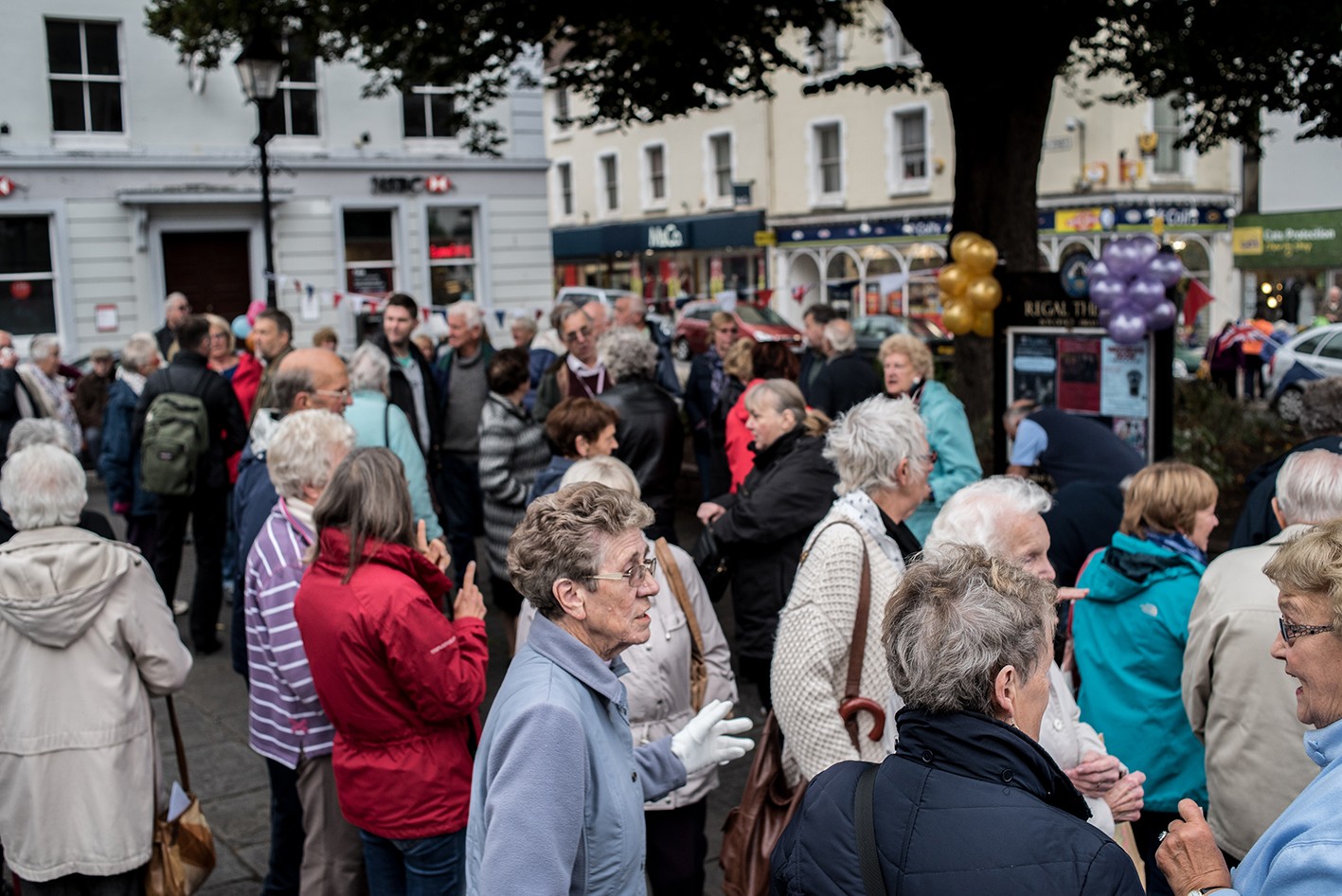 If the overheard conversations were anything to go by, I think that every single person in the Square had probably read that article and they seemed pleased to see several journalists coming to find out more. I’ve rarely had a queue of people wanting to talk to me!

But they also wanted to know if I knew any answers. I was taken aback. I thought I was going to be the one asking questions, like ‘How would losing the bus affect your life?’ But as people milled around chatting, signing, trying to grasp the bombshell, the refrains were everywhere.

“They [the bus company] are actually going to do this aren’t they?”

“Is there NO chance of a reprieve?”

The Free Press reported yesterday that, “The buses were financed by the County Council until the First Bus subsidiary, Buses of Somerset, provided a commercial service. The company said it has now been forced to the conclusion that the West Somerset routes are no longer viable.”

Minehead’s Mayor, Councillor Jean Parbrook, gave generously of her time in talking to me, but also seemed weighed down by an apparent lack of hope. “If you think about it, it’s all been a horrible accident,” she said. “Gordon Brown gave people a bus pass which, ultimately, has made the buses unviable. People have said that they would be willing, or could manage, to pay a bit – or all – towards their fare. But it seems like this isn’t manageable.”

“Do you think there is any way this can be rescued,” I asked her, sounding like a stuck clock. She gave me a frown. My Granny would have called it a ‘square look’.

County Councillor Terry Venner seemed to agree. “I think there’s very little hope. But what I want to achieve here is simply to highlight the fact that there is a need for the buses and that this petition has support. If we can get 1,000 signatures today, that’s 10% of the resident population. The aim of the campaign is to raise enough support to persuade the County Council cabinet to seek alternative funding and put the services out to tender. It’s not a luxury we’re talking about. It’s a necessity.

“The government has spent millions of pounds getting the message out to people telling them to use public transport, to walk, take the bus, choose any means of transport but the car, yet at the same time they are cutting funding to County Councils so that they, in turn, can’t fund our buses. It’s a vicious circle. We are back to where we started where the car is now king. And if people can’t drive, if they are infirm or simply too old, they are stuck – well and truly snookered. We need to show the County Council what this means.”

Terry was kept incredibly busy as people arrived in ones and twos, in groups of all sizes, on foot, on mobility scooters, in wheelchairs – and in droves on the buses – on the No.10 from Porlock and on the 101 Town bus. These – together with the 14, which runs from Minehead to Bridgwater – will cease at the end of this month. “That just leaves the 28,” said Terry. “Three out of four of West Somerset’s buses – gone.”

Betty Kisby said she wasn’t sure what she’d do. “I use the No.10 two or three times a week. I don’t drive, I have no car. I have lived in Porlock all my life. I use the bus for shopping, the dentist, hospital appointments, meeting friends, all sorts. It’s my lifeline out of Porlock.”

“Will you have to move?”

“Well I’m contemplating it – if I can get my husband to agree to it.” Betty’s friend uttered an amused groan.

Betty was even more keen that I speak to the couple standing next to her. “They’ve come all the way from Birmingham today!” 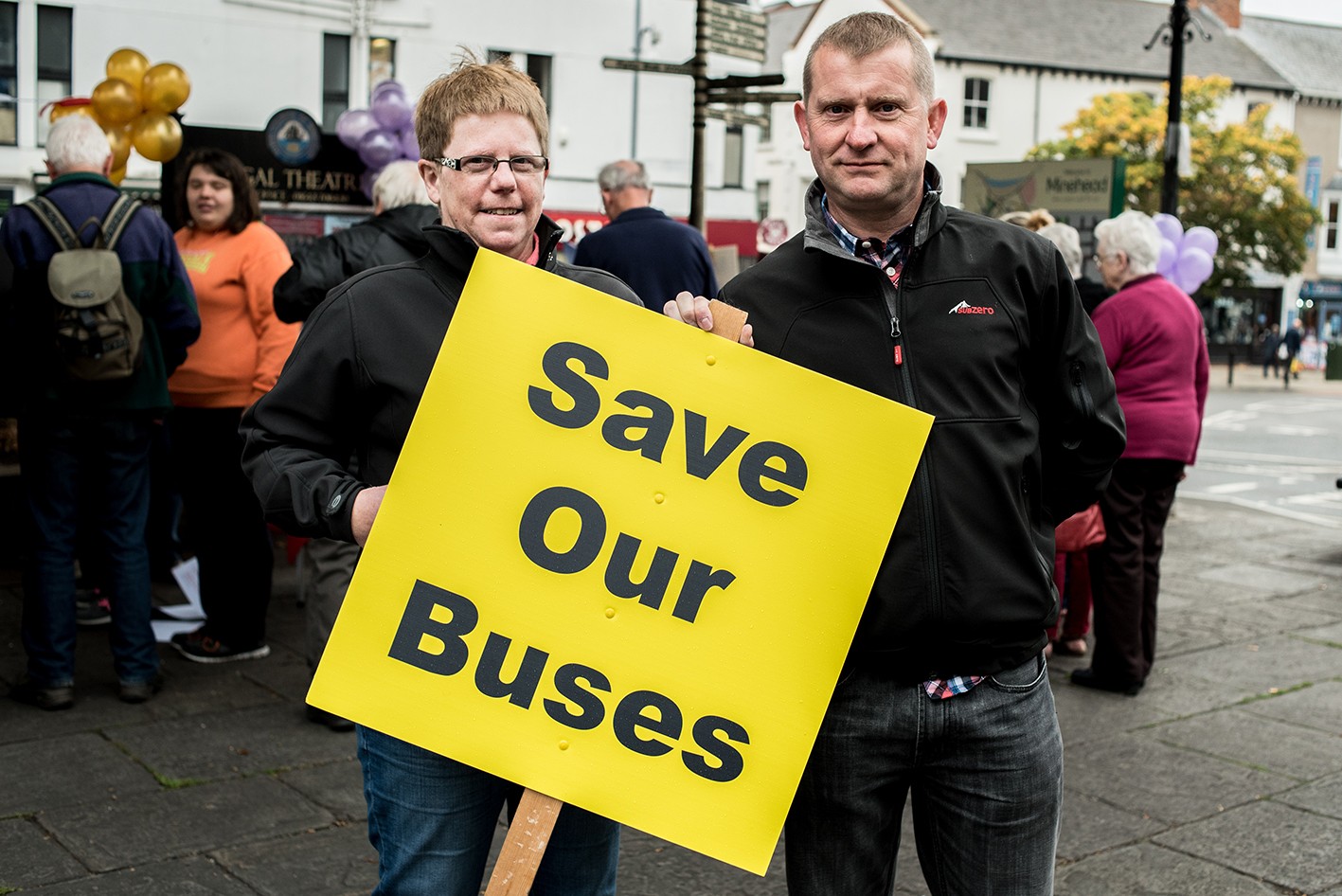 “I’ve been coming down to holiday in Porlock since I was knee high to a grasshopper – actually just one year old,” said Mr Withers. “My wife Sarah and I are regular holidaymakers and we saw it on Facebook and thought we would come down this weekend and sign the petition.”

“When we come down on holiday we use the bus, the No.10, out to Minehead and back, which means we can go into town for a meal and a drink, use the facilities and go on the steam train from Minehead to Bishops Lydeard, which we love to do.”

“Will you still come down here on holiday if there is no bus?”

“We’ll still come to Porlock but we won’t be coming to Minehead nearly as much. It’s the businesses in Minehead and Porlock that are going to suffer as well as the bus users, because people will either not come into town from Porlock when they are on holiday and vice versa. So I reckon it will affect the tourism industry quite badly, although for the people who live here it’s even worse; it’s a disaster.”

Ray and Mary Mayfield from Minehead, and their friend Muriel Cracknell, were close by, listening. “I’m 90,” Ray told me. “Although I can still drive, lots of my friends can’t. When you can’t drive any more, like I won’t be able to soon, not having the 101 will mean we just can’t get out around town.”

“That is the 101 right now,” said Mary, and pointed over the road to the bus stop outside Toucan Wholefoods. 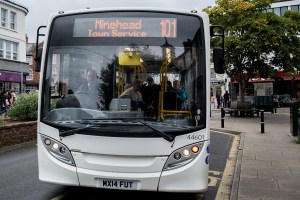 Waiting at the bus stop for a full busload of passengers to disembark was a frail gentleman, leaning against the glass of the shelter. He was a delight to listen to, but sadly my recording did not pick up his name. Wracking my brains for the lost name and failing, I posted on the Revive Minehead facebook page this afternoon, asking if anyone could help me. I got plenty of replies.

“The gentleman is Eric Freeman. Well into his nineties, he still does mileage records for the West Somerset Railway,” wrote Steve Martin. 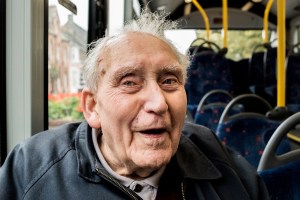 I wonder how many of these people would know Eric were it not for the 101 bus. How would he do his volunteer work for the West Somerset Railway? Imagine the prospect of losing just this one part of his life.

The bus driver was very quiet as we paid. We told him where we were from. At first I thought he didn’t want us to talk to him. But in actual fact he was just really sad and upset. 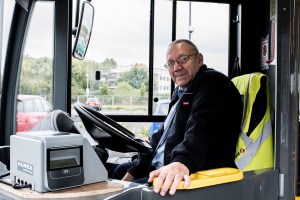 “Is there a chance that you will lose your job with these cuts,” asked our photographer.

“It’s a real possibility, yes. I can see it from all angles. It’s not the bus company’s fault. I blame Tony Blair’s government. They made a promise which it’s financially impossible to keep.”

On the bus, Eric looked miserable too but he wanted to talk. I asked him if he lived alone…

“Will you walk into town when the bus is gone?”

He threw his head back and laughed. “No, my dear, look at me. I can barely get from the bus stop onto the bus.”

“No choice, my dear. Nothing else for it.”

Imagine that, at 90 odd. It’s absolutely rubbish. I’m 41. I’m not using the bus to get to Minehead yet. There won’t even BE a bus for my generation by the looks of it. But I’d like it if there was a bus for my parents.

I get upset about lots of things in the news, so much of it makes me feel powerless, but usually with local issues there seems to be more chance of influencing the outcome. In this instance I’m not so sure. I think this is a fight, however hopeless it might seem today, to get involved in.

Have you signed the petition? It’s everywhere – in all the local shops and businesses. Actually, thinking about it as I type, we need one online. Who’s up for starting it…?

We need your support

Blog archive - Save our Buses

Find out about our five-minute actions which make a real difference. Sign up for our monthly e-bulletin along with thousands of others.